The castle of Bayt Ar Rudaydah, located 130 km from Muscat at Birkat al Mauz. The castle was built in the reign of Sultan bin Saif Al-Ya’rubi in the first half of the seventeenth century AD. At that time Portuguese and other forces were regularly invading the coastal areas of Oman and threatening the interior of the country. The Yarubid rulers of Oman forced the Portuguese to withdraw and even captured Portuguese colonies in East Africa, making Oman an imperial power.

During restoration in the 1970s and 1990s, the gate on the southern side was eliminated and a new goods entrance was added on the western side. Since 2000 the erection of a tea room in a sense reflects the original character of the complex, though its height is out of proportion. The historic Falaj Khatmain which flows through it was also reconstructed with a more urban external finish unlike the rustic charm of the original.
The word ‘Bayt’ means home, because this castle was a fortified house, in recent memory occupied by Suleyman bin Hamyar, the ‘Lord of the Jebal Akhdar’ and leader of the mountain tribes during the struggles which led to the unification of Oman. Badly damaged in the 1950s by aerial bombardment, its tragic past may have contributed to its reputation for being haunted.

The castle was restored to become a Centre of Excellence for Historic Small Arms, created and curated by Historic Arms, Exhibitions and Forts LLC. It contained a collection of rifles and pistols including highly-decorated Omani weapons as well as arms and archives from around the world documenting the development of firearms technology. 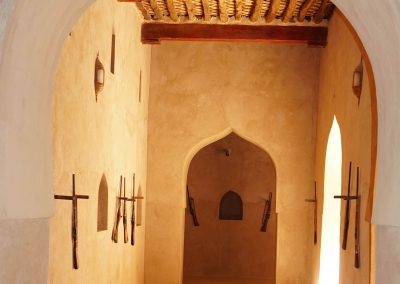 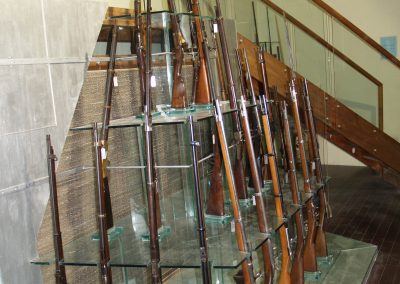 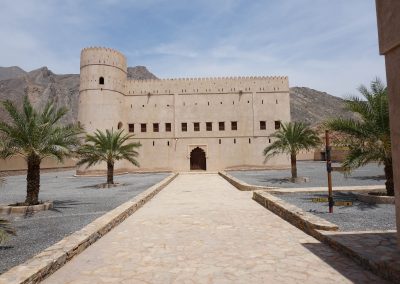 The courtyard and castle at Bayt Ar Rudaydah

The courtyard and castle at Bayt Ar Rudaydah 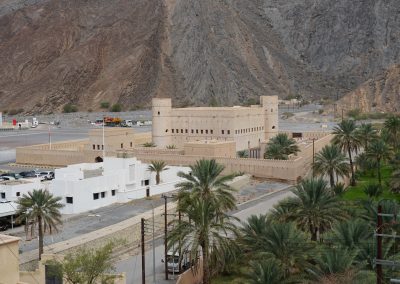