Historic Arms Exhibitions and Forts LLC (HAEF) is an Omani-registered company which is perhaps unique in being totally dedicated to the Sultanate’s historical heritage, especially of small arms and ordnance. Initially operations were under the banner, ‘ Heritage Arms in Historic Oman’ but,in 2002, nine distinguished individuals, both Omani and British, came together and created this non-profit making company. It ran an intensive programme of historically accurate shooting events with a very wide range of firearms from matchlock to late 20th century arms. This was designed to afford such shooting for both Omani and overseas visitors. The mixture of lectures and personal training made these courses attractive and successful but the 9/11 disaster virtually extinguished tourism for some years. At the request of the Ministry of Tourism, the company turned towards the restoration of the small arms and cannon scattered throughout the Sultanate in many castles and forts. In 1998 there were more than 1000 fortified buildings and sites in Oman. 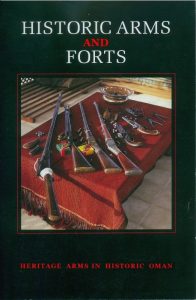 A spin-off from researching and constructing the correct carriages for the cannon in Nakhal castle was the creation of a small collection of some of the small arms belonging to Dr Christopher Roads and to the company in one of the towers of the castle. Opened in 2002 by the Minister of Commerce and Industry, then also responsible for Tourism, it proved a great success and Dr Roads was able to choose a castle, the Bait Ar Rudaydah, in which to create a world class small arms study centre. By 2004 the then new Minister of Tourism, Her late Excellency Rajha bint Abdul Ameer bin Sultan was satisfied with the plans and funds were found for Dr Roads to go ahead.

In parallel with this, encouraged by the Ministry of Tourism, HAEF surveyed most of the castles in the Sultanate and prepared plans for the conservation of over 1500 small arms and over 100 cannon. Extensive research in the military archives and records of Portugal, Spain, Britain, France and Belgium ensured that all restoration was historically correct in every detail. The company provided many castles including Jabrin, Nizwa, Ras Al Hadd, and Khasab with correct gun carriages. The company carried out conservation of all the small arms at over 20 castles but the most significant achievement was the creation of a historical ordnance centre of excellence, half in Al Hazm and the rest in Barka. This is the foremost and most complete presentation of muzzle loading ordnance in the world.

The company has carried out a many private sector commissions for ordnance, small arms, exhibitions and even elaborate rifle ranges for Omani clients, including the Royal family. The work on the Centre of Excellence for Historic Small Arms at Bait Ar Rudaydah has found pride of place.

Funding has been a problem and, though 90% complete by 2010, work on the Bait Ar Rudaydah was seriously retarded in consequence of the Arab Spring and the collapse of oil prices. Fortunately work resumed and the castle and Centre opened in April 2019.

The company has also worked overseas. HAEF researched, and then constructed in its Bowsher workshop, the teak cannon carriage outside the British Embassy in Kuwait. The company’s research has included detailing the special canteens used in the past in powder magazines and apart from their deployment in Oman and making reproductions for a castle in Britain. These are only examples of much specialist work which includes items as diverse as water lifting pumps and bore scrapers.